If you can dream it, you can do it

If you can dream it, you can do it

‘If you can dream it, you can do it’ is a quote from Walt Disney. This famous cartoon pioneer is remembered as both a dreamer and a dynamic entrepreneur. But it was not always like this. When Walt Disney was a young man, far from all his dreams came true. But he kept on dreaming, and eventually he found the right resources to realise his dreams – as if they were sprinkled with sheer magic.

We all have the resources we need to make our dreams come true – we just need to find them. If our goals and desires are important enough, we will often find the time and resources needed to succeed.

What your legs don’t achieve, your mind will
Henrik Brandt, a Danish coach and therapist, sets a good example of showing us that nothing is impossible. Henrik is not exactly the perfect image of an athlete, and the word ‘marathon’ is probably the last word to spring to mind when looking at him. Henrik is 49 years old, and the pointer on his scales lingers somewhere on the wrong side of 100 kilograms (45 pounds). He is not agile, supple or anything else you would normally associate with a serious athlete. But appearances are deceptive: Henrik is a marathon runner. Not on an elite level, but in a way that pleases and enriches him. Henrik does not use training programmes or diet plans and is by no means in top physical shape. But as Henrik says, ‘What your legs don’t achieve, your mind will’.

A runner by coincidence
Henrik’s running career is unusual and started by one of fate’s peculiar coincidences. ‘Back in 1999, I was married to a woman who had run a couple of marathons,’ says Henrik. ‘I had some trouble comprehending why she did it, though. Why spend so many hours on running, training and preparing just to end up running some more? I simply saw my wife’s many hours of training as nothing less than self-torture and a waste of time.’

Henrik continues his story by telling about him and his wife reading a newspaper article about the world’s first marathon being held on the Great Wall of China. ‘We both got excited right away. My wife wanted to run that marathon! I just wanted to watch, drink some beers and spend my holiday in an interesting and exotic country.’ 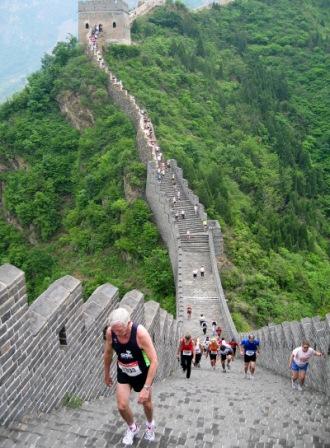 Henrik goes on: ‘I soon called the travel agency to book our tour to the Great Wall. But when they told me that the price was the same for runners and spectators, I felt a devil of injustice in me. It seemed to me that the runners got so much more for their money. And without thinking it through, I blurted out: Then sign me up for the marathon as well!’ Those impulsive words proved to have quite an impact on Henrik’s future. ‘I did not at all want to run a marathon when I said it, and I had no idea what that exclamation would mean for the rest of my life.’

The marathon holiday was booked, and Henrik and his wife started training. ‘My friends and family were shocked by the idea of me running 42.195 kilometres, but I was not going to lose face. I heard that it takes several months to get ready for a marathon, and here I had given myself two and a half months to transform myself from a couch potato to a participant in the world’s toughest marathon.’

A fantastic experience
Henrik and his wife arrived in China for the very first Great Wall Marathon in 1999. ‘With tons of butterflies in my stomach, I crossed the start line to one of the greatest days in my life. In nearly six hours I climbed up and down rickety steps and ran up and down Chinese mountains in temperatures reaching 36° C (95° F). And I beat my wife by half an hour!’ According to Henrik, the whole day felt like being in heaven and hell at the same time. ‘The cheering spectators and Chinese children in the villages we passed made my poor strength grow to levels undreamt-of, and they made me accomplish what I thought was impossible.’

‘Reaching the finish line was fantastic. I can still recall the sight of the shining medal as it was hung around my neck. I still hear the sound of the spectators cheering and clapping, and I feel the hair on my arms stand on end.’

Marathons around the world
Henrik’s first Great Wall Marathon was only the beginning of a running career that ten years later has not ended yet. ‘Since my successful marathon debut, I have run a lot of kilometres with a large number attached to my shirt. I have run ‘regular’ marathons in Copenhagen, Berlin, Paris, Stockholm, London, Thorshavn and Malta. But not least I have run some of the craziest races around the world.’

Henrik lists a series of adventurous races, he has finished: ‘I have run a marathon in the loose sand on a beach in western Denmark. In Kalundborg, Denmark, I have run a marathon that went through several bars. I have run marathons in Kenya, Greenland, Tibet and on a cruise ship off the coast of Cuba. And I haven’t settled for just the marathon distance. I once ran 78 kilometres in the Swiss Alps, on the Danish island Bornholm I ran 100 kilometres, and I took part in a 24-hour race of 132 kilometres.’ 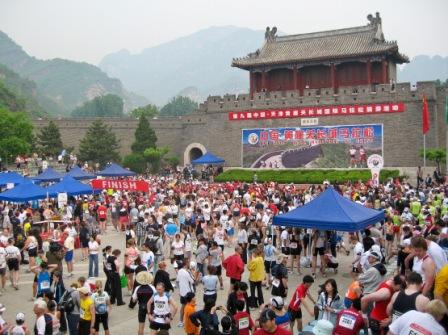 ‘In each race I have been among the very last to finish,’ says Henrik. ‘I have on more than one occasion finished only a few minutes before the official time limit. But nevertheless I have run 37 marathons and distances longer than that.’ But for this dedicated marathon freak, nothing can beat The Great Wall Marathon. ‘That race works me like a magnet on steel. Every year, once I have caught my breath from the Great Wall, I sign up for next year.’

Henrik Brandt just finished his 9th Great Wall Marathon. ‘I am the only person in the world to have finished all nine Great Wall Marathons. Actually, that has made me somewhat famous – at least in Great Wall Marathon circles. People I have never met before suddenly know my name. The media is asking me for interviews, and my name travels all around the world on various websites. You could say I have earned myself one week’s fame a year.

When the mind fails
Henrik’s favourite saying about how your mind can compensate for your legs’ inadequacies has proved its worth many times since his first marathon. ‘When I start a race, the crucial thing is not my legs, but my mind. My faith in my own abilities makes all the difference.’

But sometimes neither the legs or the mind will get the job done. ‘Three years ago my mind proved to me what happens when I don’t focus on the assignment,’ says Henrik. ‘I was signed up for the extreme Big Five Marathon in South Africa. The race was held among the wildlife on the savannah, and the course went through some hilly areas. I had run steep hills many times and had just finished The Great Wall Marathon a few weeks before. The day before the race we went for a route inspection. We stopped by a steep cliff, which we had to climb on race day. I had defeated obstacles like this before, but suddenly I felt terrified by seeing that cliff and thinking that I had to climb it. And of course, I backed down and had to quit the race right at that point the next day. I suddenly felt completely exhausted and even had to receive medical treatment.’ This experience was at the same time a failure and a lesson to Henrik. ‘I was annoyed by having to quit the race, but at the same time the experience taught me the importance of staying focused and keeping the right attitude.’

In recent years Henrik’s marathon running has not been as frequent as usual. A lot of other stuff is making inroads into his time. ‘But I keep returning to The Great Wall Marathon. This is where it all started. That race has almost become ‘my race’, and I won’t miss it for anything. 2009 is the 10th anniversary, both for me and for the marathon. I am already looking forward to rounding this milestone, but my running adventure will hardly end by that.’